If you would like to commission me to do some reporting, feature writing, or comment, to work with me as a copywriter, or to book me for your event then please email sianm[dot]norris[at]gmail[dot]com. If you would like to contact me about my novel, please get in touch with my agent, Kate Johnson at Mackenzie Wolf.
contact me 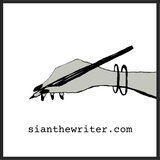